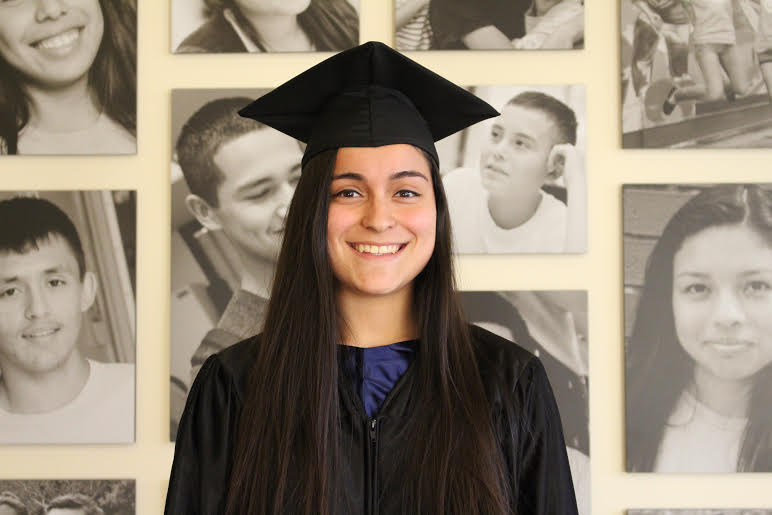 The i.am Angel team recently had the opportunity to catch up with Kimberly Ortega, a graduate from our very first i.am College Track cohort. This summer, Kimberly graduated from Wesleyan University with a degree in Government and American Studies.

Kim was born and raised in Los Angeles, California and lived right next to Estrada Courts. Growing up in Boyle Heights was a combination of many experiences for Kim; the neighborhood is a proud community culturally, where most residents are hard working families despite the difficulties they face. Kim is extremely proud of where she comes from and her community still plays a major role in her identity as a first generation college student and graduate.

During her time at school in Los Angeles, Kim was introduced to the i.am College Track program in 2012 by her 8th grade teacher. At the time, it was a new program being implemented and she was recruited to join as part of the inaugural cohort. While a student at i.am College Track, Kim had the opportunity to work with an academic and college advisor, two things she credits as helping her decide on which college she would attend. Kim also had the opportunity to study abroad in Beijing, China during her Sophomore year of high school through funding from the i.am Angel Foundation. All of these opportunities helped Kim when she went off to college at Wesleyan University in Connecticut because it gave her the skills to have a successful college experience.

At Wesleyan, Kim studied Government and American Studies. Through her college journey, i.am College Track was still a supportive force, providing her with an on campus mentor and funds to travel and visit home during holidays. She also participated in many programs while in college, including studying abroad in Spain. Her choice to attend Wesleyan University was inspired by her need for a smaller university and having the support of i.am College Track gave her the confidence to take the leap and live in a completely new place away from home.

Since graduating from college in May of this year, Kim is currently back in Los Angeles working for a nonprofit organization. She is an administrator for CAST (Coalition to Abolish Slavery and Trafficking), an organization focused on ending slavery and human trafficking across the country. On top of her role at CAST, Kim is also studying for the LSAT and hopes to one day become an immigration and civil rights attorney. She’s also interested in potentially running for office and getting involved in politics and policy work.

With all of her hard work and support from i.am College Track, Kim has been on the right track to reach her dreams and meet all her goals. She also has some great advice for current i.am College Track scholars as well; “Always believe in yourself. Oftentimes youth in Boyle Heights aren’t seen or don’t believe in themselves. You have so much power inside to really change the world and really go out and make an impact. We have a lot of things to say, so believe in the power of your voice.”

Thank you Kim, we are so proud of you here at the i.am Angel Foundation and i.am College Track. Continue to shine brightly and be an inspiration to everyone around you!